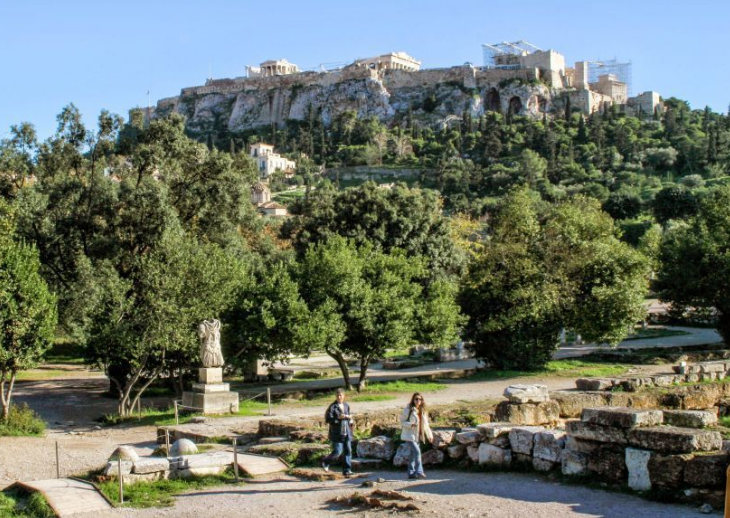 The Ancient Agora, one of the most important sights of the Greek capital, is located to the northwest of the Acropolis, between the neighbourhoods of Thiseion and Monastiraki. A large area of ancient ruins and a lot of greenery, the Ancient Agora was the centre of Athens in ancient times, the place where political meetings and courts were held.

Originally, the Agora had private residences until it was reorganized by the tyrant Pisistratus in the 6th century B.C. Although he built his residence inside the Agora, he forced all the other houses to move and closed the wells, making this area the center of Athenian government. He also created a sewage system, fountains and built a temple to the gods of Olympia. In the next century, the Athenians constructed public buildings, temples to Hephaestus, Zeus and Apollo, and planted trees.

In classical Athens (5th century BC) and at the peak of Athenian democracy, the city council (or Boulis), the presidents of the council (or Prytaneia) and the judges (or Archons) met in the Ancient Agora. The courts also met there. In 480 BC, the Persians destroyed most of the buildings of the Agora during the siege of Athens, but the Athenians later rebuilt them. The Agora became a residential area again during Roman and Byzantine times.

The first excavations at the site were carried out between 1859 and 1912 by the Hellenic Archaeological Society and the German Archaeological Institute. In 1890, work on the construction of the Athens-Piraeus railway revealed a large part of the market place. In 1931, the American School of Classical Studies began excavations again until 1941. From 1945 to the present day, work has continued. In order to excavate the entire area, about 400 modern houses covering an area of 12 acres were demolished.

Among the most important monuments of the Ancient Agora are the Temple of Hephaestus, which is the best preserved ancient temple in Greece, and the Stoa of Attalos, which was recently renovated. The Stoa was actually a commercial market built by the king of Pergamum, Attalus, between 159-138 BC. Today it serves as a museum and houses many interesting exhibits found during excavations in the Ancient Agora.