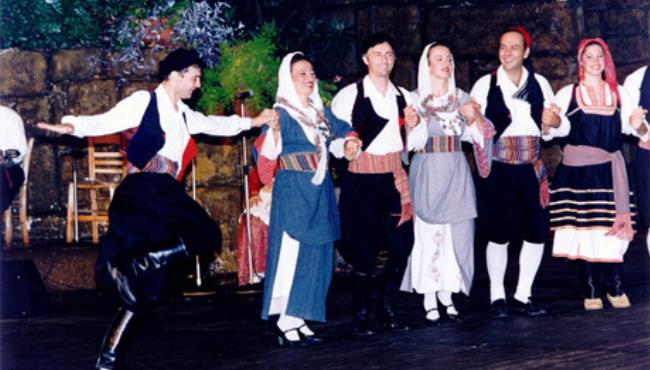 The National Theatre of Greek Dances of Dora Stratou is located on the slopes of the hill of Filopappou, just opposite the Acropolis hill and within walking distance from the picturesque district of Thiseion. It was founded in 1953 and is in fact a living museum, since every summer, five days a week, live performances of Greek traditional dances take place.
This museum is open and has a large permanent stage designed by the famous Greek painter Spyros Vassiliou, large enough to allow for different movements of the dancers. It has a capacity of 800 people and is built among tall pine trees. The performers dance all kinds of traditional dances, from every region and island of Greece. They wear traditional, handmade costumes with precious jewels on them.
The artists have a repertoire of 200 dances representing many regions of Greece. The dances are not choreographed, but are learned from close observation of how they are performed in the villages. The bands are made up of men, women and resident musicians and singers who provide live music.
The Theatre was founded by Mrs. Dora Stratou and is the result of her desire to keep alive the traditional forms of dance, music and song. She spent many years collecting traditional costumes, folk jewelry and handmade items such as shoes, swords, bells, scarves and various other items. The theatre has an astonishing collection of 2,000 traditional costumes, the largest of its kind in the world.
Dora Stratou was born in Athens in 1903 and came from a wealthy family. Her father was a politician, but unfortunately he was accused of high treason and sentenced to death in 1922, after the Asia Minor Catastrophe. This was a great shock to Mrs. Dora Stratou, who fled with her family abroad, having lost their property. She returned to Greece in 1932. She married and divorced twice.
In 1952, Mrs. Stratou saw a performance of a Yugoslavian folk band and realized that there was no such band in Greece, except for the Lyceum of Greek Women, which gave only two or three performances a year. So, he founded a Greek folk group and in 1963 the construction of the National Theatre of Greek Dances was ordered. Dora Stratou was president of this theatre for 30 years. She retired in 1983 due to ill health and passed away in 1988.
The Dora Stratou Theatre performs from May to September, every week from Wednesday to Sunday. Each performance lasts 80 minutes and includes dances from many parts of Greece and the islands. In addition to the dance performances, the Theatre organizes dance classes, lectures and research programs throughout the year. In the summer, there are also Greek traditional dance classes for foreigners in English.