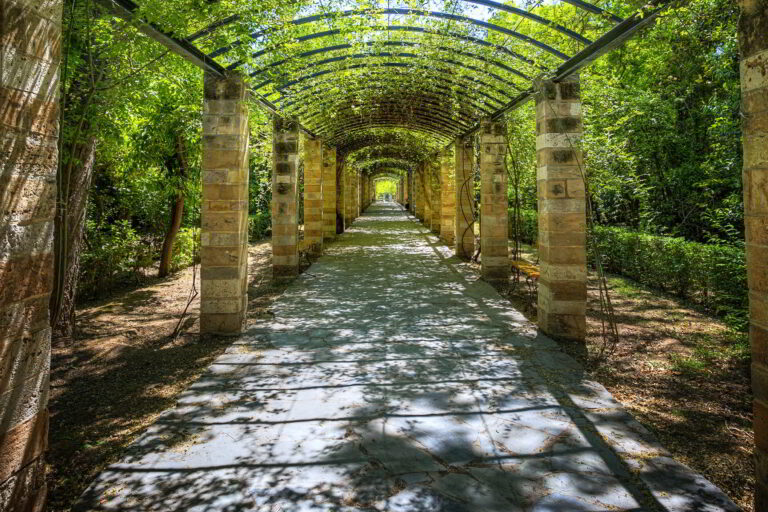 Right in the heart of Athens, between Syntagma Square and Kallimarmaro (Panathinaiko Stadium), is the famous National Garden of Athens, a beautiful area to escape from the noisy city centre and relax in a green environment. It is almost unbelievable that such an amazing garden is located between the busiest avenues of the city and yet is so well protected from the noise.

The National Garden covers a huge area of about 16 acres and has three entrances: from Amalias Avenue, Vasilissis Sophia Avenue and Zappeion Hall. It is located to the north of Syntagma Square, right next to the Greek Parliament.

The National Garden was created between 1838 and 1840 by order of Queen Amalia, the first queen of Greece. The German agronomist Frederick Schmidt was responsible for the planting of this garden. He imported more than 500 species of plants from Greece and around the world, including many tropical plants. Unfortunately, over time, some of these plants did not survive in the Mediterranean climate, but those that did survive create a wonderful environment for relaxation.

Originally, it was called the Royal Garden because it was fenced off and only the royal family was allowed to walk there. People were only allowed to stroll in the Zappeion, another small park next to the Royal Garden. However, after the restoration of democracy in Greece in 1975, the park was named the National Garden and opened to the public. Today, it remains open from sunrise to sunset.

The National Garden is distinguished by its narrow labyrinthine paths, wooden benches and small ponds in between. It hosts a small zoo with wild goats, peacocks, chickens and other animals, a Botanical Museum, a children’s library, a playground and an open café. Also particularly popular is the duck pond, where visitors throw bread and leftover food for the ducks.

Henry Miller wrote about the Athens National Garden, The Colossus of Maroussi, 1939:

It remains in my memory as no other park I have ever known. It is the quintessence of a park, what one sometimes feels when one looks at a canvas or dreams of a place one would like to be in and never finds it. Seeing the lovers sitting there in the darkness, drinking water, sitting there in peace and quiet and talking in low voices gave me a wonderful sense of the Greek character.

The dust, the heat, the poverty, the nakedness, the contentment of the people, and the water everywhere in little glasses standing among the quiet, peaceful couples, gave me the sense that there was something sacred about the place, something nourishing and sustaining. It is alive and well in the morning, as I was to discover. But at night, when you come out of nowhere, feel the hard earth beneath your feet and hear a hum of a language completely unknown to you, it is magical.