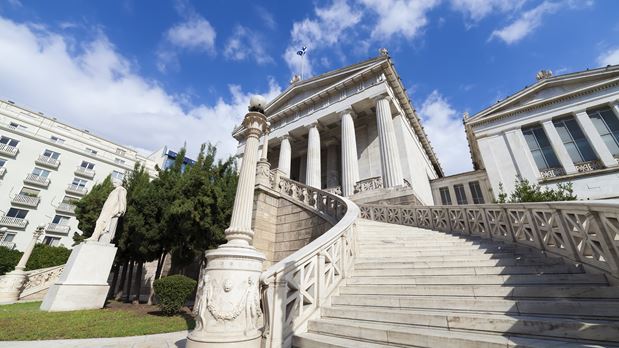 At the end of 1830, the only state library, located on the island of Aegina, which Moustoxides named the National Library, had 1,018 volumes of printed books, which had been collected by Greeks and Philhellenes.
The historic building of the National Library of Greece.
In 1834, the Library was moved to Athens, the new capital of Greece, and was first temporarily housed in the building of the public baths in the Roman Agora and later in the church of Panagia Gorgoepikoou, next to the Metropolitan Church and near other important buildings of the time. The collection grew rapidly. In addition to the purchase of books from private libraries, the Library received many large donations of books, such as that of the brothers Christoforos and Konstantinos Sakellarios or that of Markos Renieris.
In 1842, the Public Library was merged with the library of the University of Athens, which then numbered 15,000 volumes, and was housed together with the numismatic collection in the new building of the University of Riga Otto.
By 1863, the Library was enriched with a number of important donations and rare foreign-language books from all over Europe. By the Royal Charter of 1866, the two libraries were merged and administered as the ” National Library of Greece “.
The foundation stone for a new neoclassical marble building was laid in 1888. It was financed by three brothers of Cephalonian origin from the diaspora, Panagis, Marinos and Andreas Vallianos. It was designed by Baron Theophil von Hansen and its construction was supervised by Ernst Ziller. This magnificent structure consists of a central building in the form of a Greek temple of the Doric order of architecture and two wings, all made of marble from Mount Penteli with a base of porous stone. The statues of the Valianos brothers are one in front of the façade and the other two in the vestibule.
The Library remained in the older building of the University until 1903, when it was moved to the new Vallianos building, which still partially houses the Library except for two other buildings, in Agia Paraskevi and Nea Chalkidona. It is the largest library in the country, housing a unique range of thousands of books in all languages. On the front there is an imposing portico with six Doric columns, based on the design of the Temple of Hephaestus. The interior, designed by Ernst Ziller, is lit by a skylight in the ceiling and surrounded by a colonnade in Ionic style.