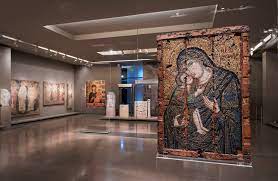 The Byzantine and Christian Museum of Athens is located in the centre of Athens, just a 15-minute walk from Syntagma Square. It is housed in a 19th century neoclassical building called Villa Ilissia. This villa was the winter residence of Sophie de Marbois-Lebrun, commonly known in Greece as the Duchess of Plaisance.

The Duchess was a wealthy lady born in America (1785) who had married a French military man in 1804 and moved to Athens in 1830. Initially, she lived in Nafplio and contributed financially to the Greek War of Independence. When Athens became the country’s capital in 1834, he moved there and built the Villa Ilisia behind the Royal Palace. The villa took this name from the river Ilissos, which at that time flowed on the south side of the gardens.

The Duchess of Plakentia died in 1854 and was buried on the mountain of Penteli in northern Attica. After her death, her estate was inherited by her French nephew, who later sold it to the Greek state.

Construction of the villa began in 1840 and was completed in 1848. The plans were made by Stamatis Kleanthis, a distinguished architect who had constructed many other private and public buildings in Athens at that time. Distinguished by simplicity and strict symmetry, the exterior of the villa is entirely covered with marble. The main building, which was the Duchess’s residence, has two floors and a basement. This imposing building is located at the back of the courtyard and has a gate at the entrance. The name of the complex is carved on the arch of the marble domed entrance. In the middle of the 20th century, some additional buildings were constructed in the garden of the villa.

The Byzantine and Christian Museum was founded in 1914 and was originally housed in a hall of the National Archaeological Museum. In 1930, the Byzantine Museum was moved to Villa Ilisia after the necessary architectural changes were made, especially in the basement, to accommodate the exhibitions. The museum’s collection includes more than 25,000 exhibits, including unique icons, sculptures, frescoes, ceramics, textiles and manuscripts dating from the 3rd century AD to recent times. From time to time it also hosts several permanent exhibitions.