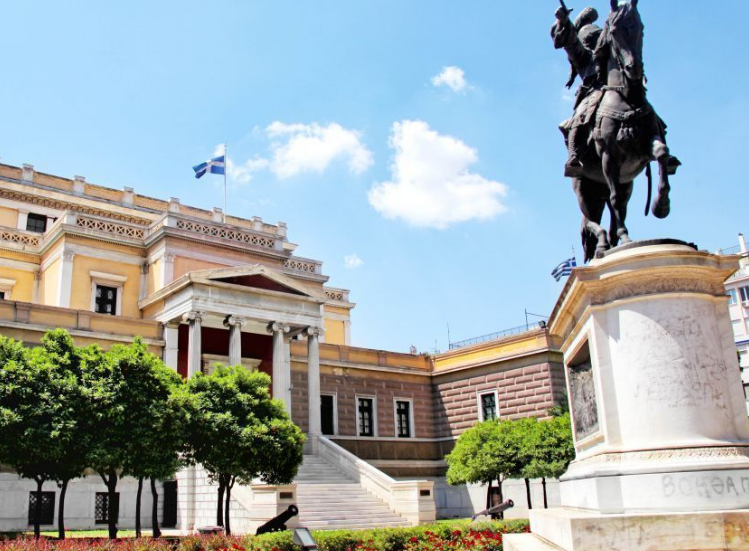 Previous Next
MUST VISIT Category: Museums

The National Historical Museum of Athens is housed in an impressive neoclassical building in the heart of the city, within walking distance from Syntagma and Omonia. This building, located at the beginning of Stadiou Street, once housed the Greek Parliament, but became a museum when the Parliament moved to its current home at Syntagma.
At first, on the site of the museum, there was the palace of King Otto, the first king of Greece, and then the residence of Al, Kontostavlos, a wealthy Athenian merchant. However, in 1854, a major fire completely destroyed the original building and then this current neoclassical structure was built to designs by architect Francois Boulanger. Designed from the outset as a parliamentary building, it had two auditoriums, one for parliamentary sessions and one for Senate meetings.
After Parliament moved to its new home in 1935, this building housed the Ministry of Justice and then the National History Museum from 1962. Its collection covers modern periods of Greek history, from the 15th to the 20th century. In particular, there are flags, weapons, furniture, folk costumes, personal items of historical Greek personalities and pieces of everyday life.
In the courtyard of the Historical Museum, three statues stand: the statue of Theodore Kolokotronis, a prominent figure of the Greek Revolution, on horseback; the statue of Charilaos Trikoupis, a famous Greek politician of the late 19th century; and Theodore Diligiannis, a Greek prime minister and political opponent of Trikoupis, who was assassinated at the entrance to the Parliament in 1905.