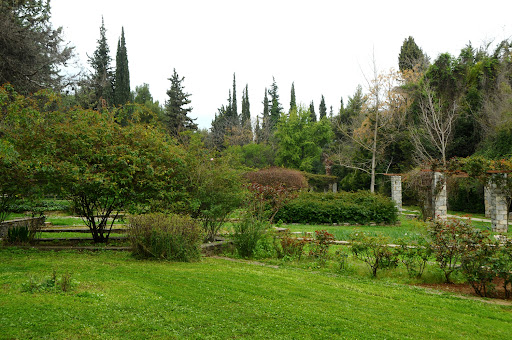 The Botanical Garden is located in Haidari, 8 km from the center of Athens and occupies an area of 1860 acres, on the northern slopes of Mount Egaleo. At the end of the Iera Odos, at the level where it joins the National Road Athens-Corinthos-Patras (formerly Kavala), the visitor will find the main entrance of the Botanical Garden (Iera Odos 403). The Garden extends just after the Dromokaiteio Sanatorium, up to the Dafni Monastery and the tourist pavilions of the Municipality of Haidari (former EOT).
It is interrupted by the road from Schistos to Korydallos which divides it into a smaller, the eastern part, and a much larger, the western part. The cultivated and visited area of the Garden is located in the western part.
The Botanical Garden is home to over 2,500 different species of plants from all over the world and a rich variety of flora. The tour of this Botanical Garden, which is the largest in Greece and the Eastern Mediterranean, starts from the Historical Plants section on the left side of the main entrance. Among others, some of them were often mentioned in Greek ancient mythology, such as Ferula communis, Conium maculatum and Lilium candidum. Anthonas, the next section, includes 15 flowerbeds and 25 ponds.
The Diomedes Botanical Garden is named after the Alexander and Julia Diomedes Foundation, the initiators and founders of this remarkable site. It was designed by W. Hammerbacher, professor at the University of Berlin, and opened to the public in 1975. Today it is used by the Agricultural Department of the University of Athens for studies. It offers wonderful trails, seating and recreational areas for countryside meetings and, above all, an exceptional ecosystem. It is an ideal place for nature lovers and families. There is also a café, restaurant and a playground for children to play safely. Entrance is free of charge. Bicycles, pets and domestic animals are not allowed.