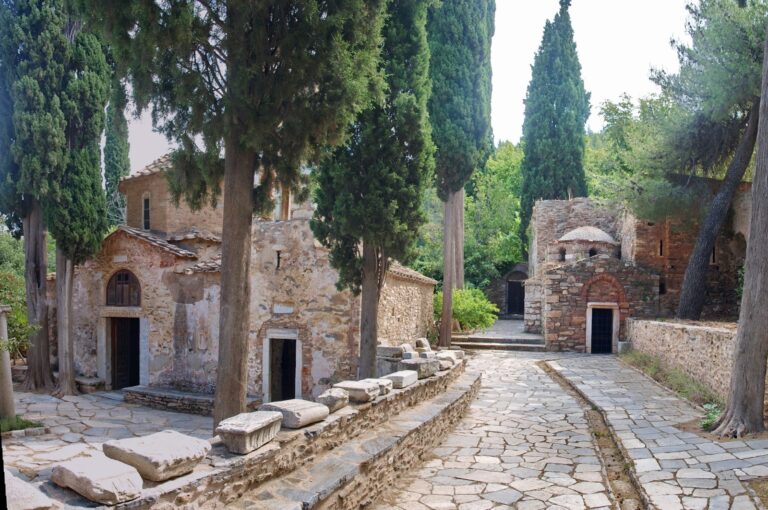 Previous Next
MUST VISIT Category: Churches

The monastery of Kaisariani is a medieval church in Attica. It is located in the plain of Ymittos, almost in the middle of the length of the western slope. In the old days the landscape was tree-lined and full of olive trees, while near the monastery a spring with abundant and cold water was bubbling up. This spring is probably the one called ‘Kallia’ by the ancient Greek and Roman poets.

A little further up from this point the site in ancient times was dedicated to Aphrodite and was called “Killou Pira”, today commonly known as “Kallopoula”. In the early Christian centuries, a Christian temple was founded near the spring, whose building materials were later used in later buildings around it. The present church was built in the 11th century and is dedicated to the Presentation of the Virgin Mary. Around this church the area, now called Kaisariani, developed.
Kaisariani was first mentioned in a letter of the metropolitan of Athens Michael Akominatos at the beginning of the 13th century
A high wall surrounds the buildings, the katholikon (mainly the church), the dining hall, the bath and the cells, and thus, they are still quite protected to this day. In the original design there were two entrances, the main entrance on the east side and a larger one on the other side.
The monastery was built on the ruins of an older building. The layout of the Kaisarian Monastery was drawn in 1745 by a Russian pilgrim named Barsky, and shows the following buildings: the katholikon on the eastern side of the wall around the monastery, the bath on the southern side, the monks’ cells, which border the Benizelos Tower, and the dining hall in the western wing. In addition to the vegetable garden on the southwest side of the monastery, the monks’ cemetery and a later church are depicted.
The katholikon belongs to the usual Byzantine style, with semi-hexagonal arches. However, the narthex and the frescoes of the katholikon date to the Ottoman period, as do most of the buildings of the monastery, with the exception of the olive mill, which was originally a bathhouse, which seems to be contemporary with the katholikon.The buildings are scattered in a courtyard. The katholikon was on the east side, the dining room and kitchen on the west side as well as the bath, which was converted into the monastery’s olive mill during the Turkish occupation, and finally, the monks’ cells in front of which was an open gallery.
The katholikon is dedicated to the Presentation of the Virgin Mary and was shaped like a cross, faithful to the Greek tradition according to M. Sotiriou, or the semicircular quadrilateral according to Anastasios Orlandos.
The entrance to the church was on the west side, not separated by a narthex. There was another entrance on the north side, with a marble threshold and a Roman schism. The narthex, which was certainly built before 1602, is a vaulted roof with a dome and a skylight in the middle.