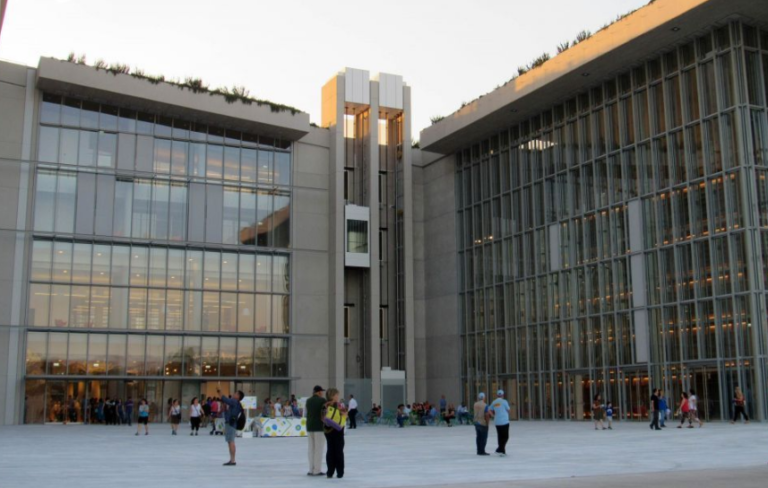 The idea behind the implementation of the Stavros Niarchos Foundation Cultural Centre was originally born in 1998, when the Stavros Niarchos Foundation decided to make a donation that would create a multi-purpose space that would enrich the cultural aspect of Athens. Initially, the donation was intended for the National Library and the National Opera House separately, but as plans progressed, it was decided that a new building should be constructed to house both institutions together. In 2008, Italian architect Renzo Piano was commissioned to undertake the important project, and the construction process began in 2012 and was completed in 2016.

The National Library was founded in 1832, a few years after Greece was declared an independent state. Until recently, it was housed in the magnificent neoclassical building on Panepistimiou Street (designed by Ernst Ziller). With great respect for its history and care for the extremely important books, documents and writings it houses, the library’s base will be gradually transferred to the Stavros Niarchos Foundation Cultural Centre to meet the requirements of the new digital age. Aspiring to become a research centre of global impact, the new National Library offers state-of-the-art facilities to assist academics, researchers, students and readers alike.

The National Opera House is an impressive achievement, a venue that can accommodate even the most demanding performances. With the latest technological equipment, impeccable acoustics, state-of-the-art design and top-notch aesthetics, it can support the staging of major singing and dance productions, offering a superior experience to both performers and audiences.

Finally, the Stavros Niarchos Park is literally a breath of fresh air in the grey city of Athens. Huge in size, the park is overgrown with classic Mediterranean flora, such as olive trees, aromatic herbs and flowers carefully planted to bloom according to the season. The park is filled as alleys and places suitable for gatherings, where families and friends can enjoy a picnic or a walk, while children can engage in hours of play. Bicycles are allowed, and it is also a great place for sports activities. Some of the park’s most impressive features include the large saltwater canal with its picturesque plaza, the Lighthouse which is an ideal spot for reading and relaxing, and the photovoltaic canopy.

The Stavros Niarchos Foundation Cultural Centre was donated to the Greek State in 2017, in an impressive ceremony. Entrance to its premises is free, and there are special facilities for people with disabilities. Visitors can reach the centre by a special minibus that departs from Ermou Street (at Syntagma Square) or by metro, tram, bus and trolley.