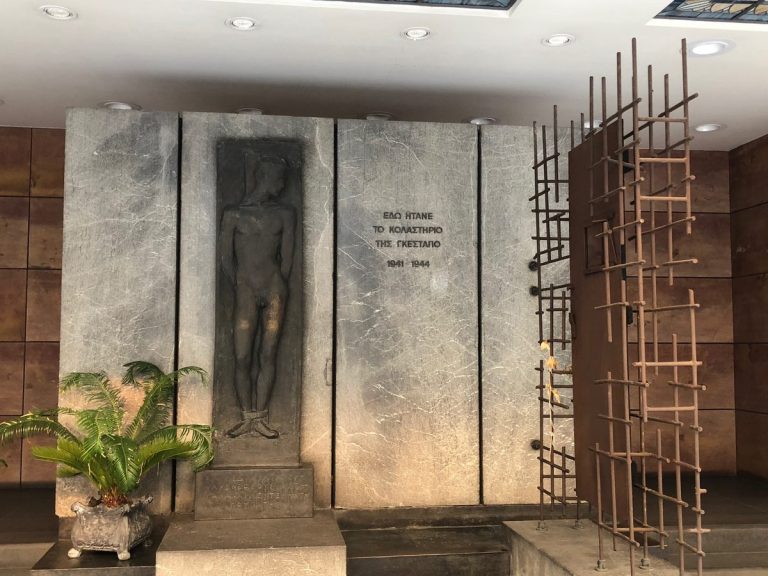 WHEN THE GERMAN ARMY INVADED and occupied Athens in April 1941, it began enacting laws to control the local population. Many Greeks resisted these laws, and the Greek Resistance Movement was soon organized, known as one of the fiercest resistance groups in World War II Europe. When the resistance began having an impact on the occupation, the Germans sought retribution.

The Nazi occupation force included the ruthless Gestapo, which requisitioned a building at 6 Merlin Street in central Athens to act as its headquarters. The site served as the primary interrogation center of the secret police, outfitted with torture chambers and prison cells. Those suspected of being members of the resistance, or committing individual acts of defiance, were brought to this hellish place.

Hundreds of individuals who passed through the doors of the building were either tortured to death or sent to the nearby concentration camp of Chaidari. The Nazis left many of the bodies hanging from trees for days, guarded by local collaborators, to send the message that acts of defiance would be dealt with swiftly and without mercy.

When the Germans withdrew from the city in October 1944, the building returned to civilian use. In the 1980s, it was converted to a shopping center, and the site of the former Gestapo building now houses a beauty retail chain; the area where the torture chambers were is now full of cosmetic displays.

This eerie place now tells the story of a dark chapter in human history that should not be forgotten. Outside the building is a memorial to those that were detained, tortured, or killed at 6 Merlin. The memorial includes a carving of a bound prisoner, one of the original torture chamber doors, and several plaques. One of the plaques reads, “Free people were led through this door.”

Know Before You Go
The building is now one of the Hondos Center locations in Athens. The memorial is just to the right of the main entrance.