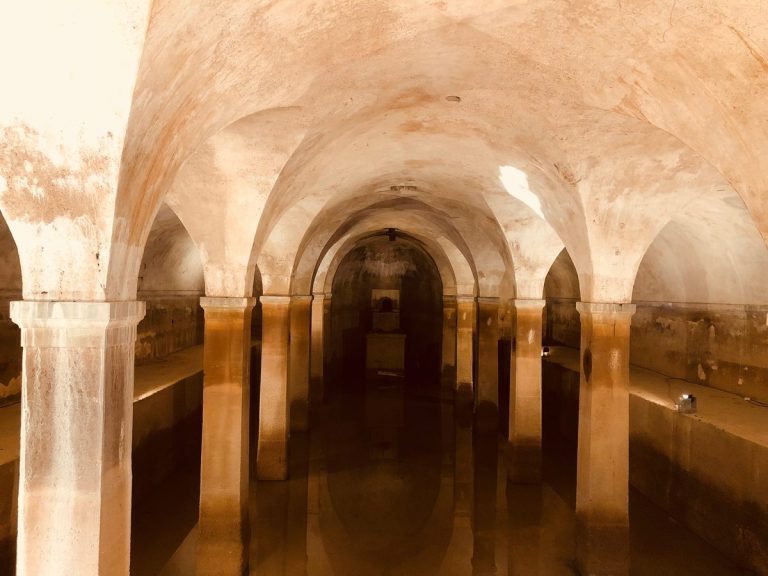 ONE OF ROMAN ATHENS’ most amazing engineering feats now lies below a modern outdoor movie theater. Fans of the silver screen can gather beneath the night air to watch their favorite films, all while perched atop a nearly 2,000-year-old reservoir.

Due to Athens’ growing water needs in the second century CE, Emperor Hadrian ordered a project to increase the city’s water supply. Construction thus started in 125 for an aqueduct that began at Mount Parnitha and stretched more than 12 miles to the base of Mount Lycabettus, where a reservoir was built.

The aqueduct consisted primarily of an underground channel constructed manually through solid rock. When completed in 140 CE, it was Athens’ largest infrastructure project to date.

Hadrian’s Reservoir sits at the western base of Mt. Lycabettus. Pipes originating there provided enough water to cover the needs of the area’s residents for over 1,000 years. The structure had a propylon (destroyed in the late 18th-century) with four Ionic columns and an architrave with a dedication to Hadrian and his successor Antoninus Pius, during whose reign the work was completed.

The reservoir was abandoned during the Ottoman Empire’s occupation, causing most residents to become reliant on wells. Restoration of the aqueduct began in 1847, though it ceased to be a main source of water after the construction of the Marathon Dam in 1929.

Today, it no longer supplies drinking water. Some water from the reservoir still makes it to the end, though it empties right into the sewer. Currently, only parts of the steps and two column bases remain at the site. A portion of the architrave also still exists, though it currently sits in the National Gardens.

Know Before You Go
The reservoir sits in Dexameni (Reservoir) Square, beneath Cinema Dexameni. Access inside the reservoir building is restricted; however, there are large viewing portals on the western walls that offer a great view inside.

Annually on January 6, the Epiphany, the Greek Orthodox ritual of the “Blessing of the Waters” is held in front of the reservoir. During this ritual, the reservoir is opened and the water is blessed by a priest, who immerses a cross in the water and then sprinkles followers with the now-holy water.

If you wish to view the portion of the architrave that still exists, it sits in the National Gardens near the Children’s Library.