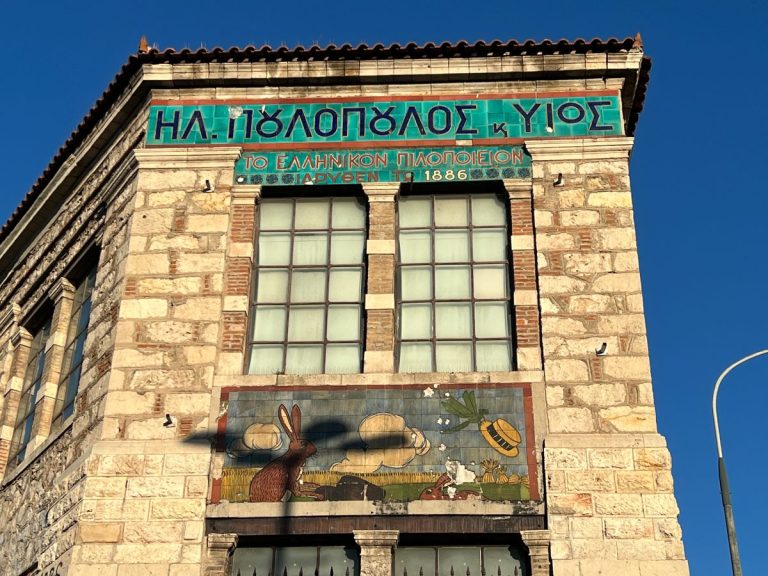 IN 1886, A CLOTH WHOLESALER from Kalamata named Elias Poulopoulos traveled to Athens with dreams of success. Poulopoulos had a passion for hats and was determined to start a factory to produce them. He purchased a large plot of land in the Thissio area of the city, and by 1890 his dreams were fulfilled when he opened the Poulopoulos Hellenic Hattery, soon to be commonly known as the Poulopoulos Hat Factory.

The factory was built in the shape of a trapezoid, with curved stonework interrupted by false Doric columns and a tile roof with a tall chimney rising above the factory. The building was nearly 40,000 square feet and originally covered an entire city block surrounding a central courtyard. It was originally a single-level building but a second level was later added. A unique feature was the brightly colored sign on the building’s exterior bearing the company’s logo. The factory’s chimney and logo became synonymous with the Thissio area.

Poulopoulos produced new and innovative styles of hats and created a successful and growing business. The population exchange between Greece and Turkey in 1923 resulted in a boost in business that helped make the Poulopoulos Hat Factory not only the largest hat makers in the Balkans, but also the winner of numerous international competitions.

As its peak in the 1920s, the factory had more than 400 workers. Business still thrived in the ‘30s and early ‘40s until World War II, when the Germans inflicted significant damage to the building. Evidence of the destruction is still visible today in the form of shrapnel and exterior bullet hole damage.

When the German occupation ended, the factory reverted to civilian use and operated for a few more years until it closed due to the post-war economy not being able to support it. Only a small part of the original building survives today, and in 1985 what was left was given historical status by the Greek government due to its importance to industrial architecture.

In 1988, the government purchased the building and restored it. A portion of it now houses a small graffiti-covered cultural center in honor of Melina Mercouri, a Greek actress, singer, politician, and strong advocate for the protection of Greek culture.

Know Before You Go
Visitors should be aware of their surroundings, as this area borders a high crime area and has fast traffic on the streets in front of the building with blind spots.