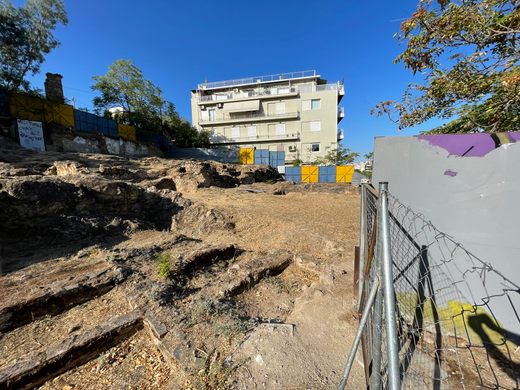 On 24 Ardittou str. if you climb a few steps from the street level and peep over the metal fence, you’ll get a glimpse of the ruins of the Temple of Artemis Agrotera, the goddess of the hunt, dating back to the 5th century BC. Sadly, this important archaeological site has been abandoned, as it is entangled in a legal dispute concerning the land ownership. Archaeologists are pushing for the issue to be resolved as they insist that the site forms an archaeological unity with the neighbouring magnificent Temple of Olympian Zeus.

IN GREEK MYTHOLOGY, ARTEMIS WAS the goddess of the hunt, the wilderness, and wild animals, and was among the most respected goddesses in ancient Greece. In the 5th century BCE, Callikrates designed and built a temple to honor Artemis. The small Ionic Temple of Artemis Agrotera was constructed on the south bank of the Ilissos river, considered sacred in ancient times. The temple was constructed with Pentelic marble, with a colonnaded portico in the front and rear facades.

The temple remained largely untouched until it was converted into a Christian basilica in the 5th-century. In the 1600s, a dome was added and the church was dedicated to the Virgin Mary and was thereafter referred to as Panagia stin Petra (“Mary Mother of Jesus in the Rocks”).

The temple was destroyed in 1778 when the occupying Ottomans began demolishing ancient sites and using the spoila to reinforce the walls around the city. The site served as a dumping ground for rubble until 1897, when the Archaeological Society at Athens conducted the first official excavation. This excavation not only exposed portions of the temple, but also a large arch, a fragment of a frieze, numerous small votive vessels believed to be associated with the Eleusinian Mysteries, and several early Christian tombs.

In 1960, the Greek Ministry of Culture determined the 50 meters on each side of the Ilissos river were archaeologically significant. Excavations in 1962 revealed more valuable objects, and in 1964, the Ministries Central Archaeological Council specifically protected the entire temple site.

In 2006, demolition of modern buildings adjacent to the site occurred with demolition ceasing shortly after the ruins were found embedded in the walls of the buildings. In 2009, adjustments were made to the demolition plans, and demolition and archeological excavations resumed with many new important finds. The excavations gradually slowed due to budgetary issues. By 2014, it was rare to see any work performed at the site. The partially excavated site currently consists of worn slabs, column bases, and portions of the retaining wall.

Know Before You Go
The temple was one of several of the same design built across Athens, the only other standing one being the Temple of Athena Nike on the Acropolis. Artifacts from excavations are on display in the Archeological Museum and detailed renderings by J. Stewart & N. Revett of how the temple stood in 1753 are on display in museums in Berlin and Venice.