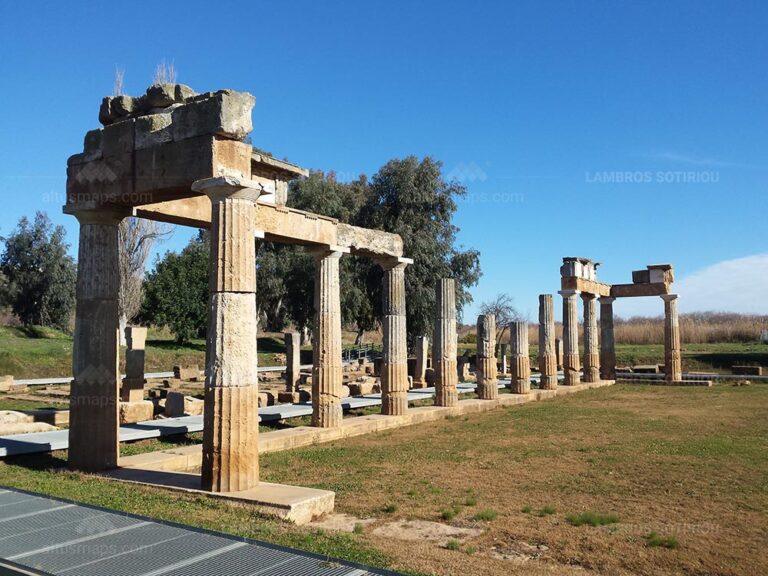 The Sanctuary of Artemis of Vravronia, located on the eastern side of Attica, was one of the most important sacred places of antiquity. Vravrona, about 20 km from Athens, was one of the 12 cities of Attica that were united with Athens by Theseus.

The first inhabitants settled in Vravrona around 3,500 BC and were Pelasgians in race. Gradually the city developed around an acropolis and many important Athenian politicians were descended from Brauron, such as Miltiades, Cimon and the tyrant Pisistratus. In fact, it was the tyrant of Athens, Pisistratus, and his sons who originally founded this cult of Artemis in the 6th century BC.

The ancient temple of Artemis is Doric in style and flourished in the 5th-4th centuries BC. According to one legend, this is the temple to which Iphigenia was brought by her brother Orestes when they met in the land of Tauris, where she served as a priestess in a local temple of Artemis. Iphigenia had been brought to Tauride by the goddess Artemis herself, when she rescued her from sacrifice at Avlida. Returning to Greece, Iphigenia brought with her a wooden statue of Artemis from Taurida.

In the temple of Artemis of Brauronia, the goddess was worshipped as the protector of nature and women. Mostly she was worshipped as the patroness of childbirth. In fact, women who had a good childbirth offered their clothes and personal belongings to the goddess Artemis, while the clothes of women who died during childbirth were offered to the tomb of Iphigenia, who was considered a chthonic deity (deity of the underworld). The tomb of Iphigenia can still be seen today in a cave on the archaeological site.

Every four years there was also an important festival in honour of the goddess. A parade of girls aged 5-10 years old dedicated to the goddess started from the centre of Athens and ended at the temple. The girls wore furs made from a bear, the sacred animal of the goddess. This was like a preparation process that symbolized the passage from childhood to youth and marriage. In fact, most of the objects found at this archaeological site were women’s personal belongings, clothing and jewelry.

In the ancient site of Artemis Brauronia, visitors can nowadays see the ruins of the temple, the sanctuary of Iphigenia, the gymnasium and other buildings. Many finds have been transferred to the interesting Archaeological Museum of Vravrona and others to the new Acropolis Museum. The surrounding nature is magnificent and you will see a stream running through the site. This small river has been running through the site since ancient times and has caused many problems to the buildings. In fact, due to an overflow of this river the temple was abandoned in the 3rd century BC.