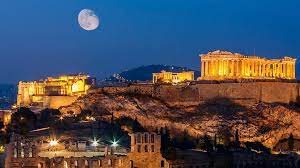 History of the Acropolis

The Acropolis in Athens was a fortress and military base during the Neolithic period, due to its location offering excellent views of the land and sea. During Mycenaean times, it became a religious centre, dedicated to the worship of the goddess Athena.

It is said that the place was declared a province only for the gods by an oracle, and therefore ceased to be inhabited by humans. The three most important temples, the Parthenon, the Erechtheion and the Temple of Nike, were built during the classical period (450-330 BC) on the ruins of older temples. All three are dedicated to different aspects of the goddess Athena. The Persians destroyed the Acropolis during the Battle of Salamis in 480 BC.

It was the founder of the Athenian republic, Pericles, who rebuilt it in the form it retains today. He turned it into a city of temples and, like everything else created at that time, he turned it into the ultimate achievement in terms of classical Greek architecture and sculpture. The Acropolis of Athens has, since then, been through a lot and its remains reflect every period of the city.

The Parthenon was converted into a church dedicated to St Sophia by the Byzantine Christians, while the rule of the Franks in 1205 turned the hill into a fortress and residence of the noble Franks. At that time, the Parthenon was a Catholic church called the Virgin of Athens. The Ottoman occupation in the 15th century turned the building into a mosque. When Greece finally became independent from the Turkish occupation, the preservation of the monuments became a project of major importance, and remains so to this day.

This monument is the symbol of ancient Greek civilization. It is the most important monument to date. It was dedicated to the patron goddess of the city, Athena, since Parthenon also means the apartment of the virgin. Athena was the goddess of wisdom, war and also a virgin. The Parthenon is located at the top of the Acropolis hill. It was created between 447 and 432 BC, during the golden age of Pericles, by the architect Ictinus and with the help of Callicrates.

The famous Athenian sculptor Phidias was the supervisor of the whole project, which is an excellent example of the Doric architectural style. It is made of Pentelic marble and consists of 8 Doric columns on each of the narrow sides and 17 columns on each of the long sides. The most amazing fact about this perfect achievement is that its columns are made in a zigzag shape to give the impression that its foundations are straight. In its central section was a pool of water and housed a 40-foot-tall statue of Athena, made of gold and ivory.

The combination of Doric metopes and Ionic frieze on the walls is considered a unique masterpiece. On the east side, the metopes depict the battle of the Gods against the Giants and on the east side the battle of the Lapithians against the Centaurs. The south side depicts the triumph of the Greeks against the Amazons and the north side the victory of the Athenians over the Trojans. The frieze covering the sides of the temple depicts the most important religious festival in Ancient Greece, the Panathenaea.

The designs include the figure of gods, animals and more than 360 people. The two pediments of the temple depict the birth of Athena and the battle between her and Poseidon for the name of the city. The temple underwent many transformations, and its final destruction occurred in the 19th century: the British ambassador to Constantinople, Lord Elgin, stole its decorations and sold them to the British Museum, where they can still be seen today.

The Erechtheion
This temple is located in the holiest part of the entire sacred hill. This side of the Acropolis was indeed the sanctuary where all the cults and ceremonies of Poseidon and Athena were held. It got its name after Poseidon killed Erechthonius, a mythical king who had the body of a snake. The temple was part of the work of Pericles and is located on the north side of the Parthenon. It was begun late, in 421 BC, due to the Peloponnesian Wars, and completed in 406 BC.

It is an amazing example of Ionic architecture, consisting of three main parts of different dimensions, which are the main temple, the north and the south stoa. The two parts of the main temple are dedicated respectively to Athena and Poseidon. The northern terrace of six columns leads to the Temenos of Pandrosos, the place where Athena’s sacred gift to the city, the olive tree, grew.

The north porch of the temple is the most famous, as it is the one with the Caryatids, the six women who replace the columns that support the marble roof. The Caryatids were carved after some beautiful young models who were women from Karyes, a village in Laconia.

The temple of Athena Nike

This small temple was built between 427-424 BC to a design by the architect Kallikrates. It is perched on a platform at the southwestern edge of the Acropolis and is also closed to visitors. It is a nearly square building of Ionic architecture with four Ionic columns at each end. Its frieze is adorned with a magnificent scene depicting the conference of the gods and other mythological scenes on the east and south sides and battle scenes on the other sides. Most of the frieze has been destroyed, while some parts, such as the beautiful representation of Athena Nike fixing her sandal, are on display in the Acropolis Museum.

The temple of Athena Nike was the shelter of a stunning statue of the goddess Athena holding a pomegranate, the symbol of fertility, in her right hand and a helmet, the symbol of war, in her left hand. The temple has been destroyed twice: once after its demolition by the Turks in 1686 and once after 1936, when the platform collapsed. As a result, it has also been rebuilt twice.

The Propylaea are in the same line as the Parthenon and are the monumental gateway to the Acropolis in Athens. Built to a design by Mnisiklis, they consist of a central hall and two side wings. The sections of the temple were formerly the only possible way of entrance to the Acropolis. The north wing was decorated with painted frames and was used as a gallery.

The south wing was the vestibule of the temple of Athena Nike and the ceiling of the central hall of the Propylaea was painted with gold and colourful decoration. The north wing was decorated with painted panels and was used as a gallery The building was built during 437-432 BC and was severely damaged in the 17th century by an explosion. Its restoration began in 1909 and is still going on today.

The Panathenaic Way was the route followed by the procession of the Panathenaic procession during the Panathenaic festival. It was the most important event of ancient Athens, dedicated to the goddess Athena and included dances, athletic, dramatic and musical contests. The route crossed the centre of the Acropolis, starting from Kerameikos and ending at the Erechtheion.

The procession was the highlight of the festival, as it took place on the last day. It consisted of men carrying animals for sacrifices to the goddess, girls carrying drinking vessels (called rytones), musicians and girls holding the sacred shawl called the veil. The procession ended when the girls placed the veil on the statue of Athena Polyas, inside the Erechion.

The statue of Athena Promahos

On the Acropolis one can see the remains of some important statues that formed a pathway. In one of them, 15 metres from the Propylaea, is the giant statue of Athena Promahos (champion). This statue, 9 meters high, was a symbol of the victory and strength of the Athenians against the Persians. This symbolism is the reason why its sculptor, the famous Phidias, depicted the goddess holding a shield in her left hand and a spear in her right. The statue was brought to Constantinople by the Emperor Theodosius in 426 AD. It was destroyed in 1204 by the city’s inhabitants, who blamed the statue for the invasion the crusaders suffered.

The southwestern slope of the Acropolis of Athens

This area of the Acropolis is where all the public buildings were built. It was the part of the hill where all the important artistic, intellectual and religious activities of the city took place, hence its importance for ancient Athens. Here are the most important monuments that stand in this area:

The Theatre of Dionysus

The remaining ruins of the 5th century theatre built of stone and marble by Lycurgus indicate the grandeur of the site: the amphitheatre had 17,000 seats of which only 20 have survived. The Hellenic Archaeological Society began excavations around the sanctuary of Dionysus and unearthed the theatre of Dionysus in 1838. The decorative relief at the back of the stage is from the 2nd century BC and depicts the life and myths of Dionysus. Unfortunately, most of the figures are headless.

During the golden age of Pericles, when Athens was at its height, one of the most important events of the year was the annual festival of the Great Dionysia, established in the 6th century AD by the tyrant Pisistratus. It was a very interesting and cultural event. Politicians and rich people sponsored dramas and comedies by playwrights such as Aristophanes, Aeschylus, Euripides and Sophocles. Visitors came from all over Attica to enjoy the plays and the various festivities. The Romans also used the Theatre of Dionysus for their state events, some ceremonies, and theatrical performances.

The Temple of Thrasyllus
This temple was erected in 320-319 BC by Thrasyllus. It stood on the catatomb, the large rock that had been artificially levelled vertically for the construction of the Theatre of Dionysus. The only remnants of this temple are the two Ionic columns that stand above the magnificent, tiny chapel of Panagia Chrysospiliotissa (Panagia of the Golden Cave), which was built in a small cave of a rock hidden behind the Theatre of Dionysus.

The Stoa of Eumenes
Below the Asclepieion is a long colonnade built by Eumenes II, King of Pergamum (197-159 BC). This colonnade is known as the Eumenes’ Stoa, it was built of stone and marble and was used as a shelter and walkway for the theatre audience.

The Asclepieion
The Asclepieion was built after 420 BC for the worship of the physician Asclepius, son of Apollo. It is located at the left top of the wooden steps leading to the Theatre of Dionysus. It consists of some of the foundations of the temple of Asclepius, a Doric stoa used as a lodge, an Ionic stoa dating from the late 5th century BC and an altar. The excavation of Asclepius was carried out by the Hellenic Archaeological Service.

Theatre of Herod Atticus
This theatre was built by Herod Atticus, a wealthy Roman. He created this architectural marvel in 160 AD, in loving memory of his wife, Rigillis. This huge structure has a radius of 38 metres, which allows it to accommodate more than 5,000 spectators. The seats were made of marble. It was discovered in 1857-58 and restored in 1950-61. The Athens Summer Festival, which takes place every year, now uses the Herod Atticus Theatre from music to dance performances or theatrical productions. Famous artists and performers come from all over the world to perform there and create an amazing atmosphere.