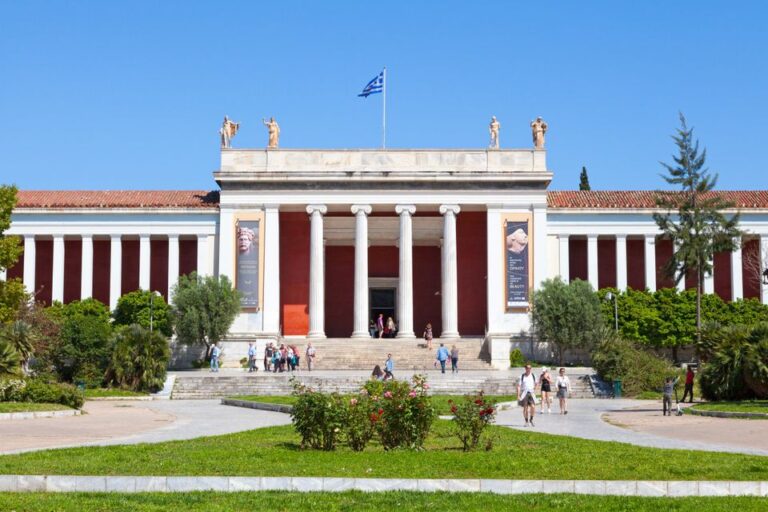 The National Archaeological Museum of Athens is located on Patission Avenue, near Omonia Square. The first Greek archaeological museum was founded in 1829 on the island of Aegina by Governor Ioannis Kapodistrias. When Athens became the capital of Greece in 1830, the Archaeological Museum was moved to different buildings, for example the Temple of Hephaestus in the Ancient Agora and the University of Athens.

The building that houses the museum used to house the Parliament and then the Ministry of Justice. It was designed by the German architect Ernst ZillerIts and its construction was completed in 1889.

Some modifications to the original plans were later made by the Greek architect Panagiotis Kalkos, when the building was given to the Historical and Ethnological Society of Greece to be converted into the Archaeological Museum of Athens. However, the amphitheatre of the old Parliament is still visible today and is a living architectural treasure. It retains its imposing assembly hall, which in addition to housing a remarkable historical heritage, is also used to host important cultural events.

The museum’s permanent exhibition includes artefacts from the ancient history of Greece. The museum displays objects from the prehistoric and Minoan periods, the classical period, during which Athens was at its peak, Roman and Hellenistic times through Byzantine times, the Venetian period, the Ottoman occupation, the Greek Revolution and recent Greek history. In short, the museum hosts exhibitions from all periods of Greek history. Among the ancient collection, you will see marble or stone statues, miniatures, tombstones, bronze objects, tools, weapons and objects of everyday life.

There are also finds from excavations throughout Greece, such as the excavations in Mycenae carried out by Heinrich Schliemann, who secured the golden mask of Agamemnon for the museum. One of the museum’s collections is the Ethnographic Collection, which stands out because of its rapid growth. It includes traditional objects of modern Greek folk art, as well as local costumes, pieces of jewellery, embroidery and textiles. It also has ceramic, wooden and metal objects of both functional and decorative use.

The southern part of the Archaeological Museum houses the Epigraphic Museum, which exhibits some 15,000 Greek inscriptions dating from antiquity to modern times in Greece. The museum also houses a large library with rare manuscripts, science and philosophy books and publications. The museum’s library contains some 20,000 volumes, some of which date back to the 17th century.

The Archaeological Museum is within walking distance from Omonia or Victoria Station. It is open daily.