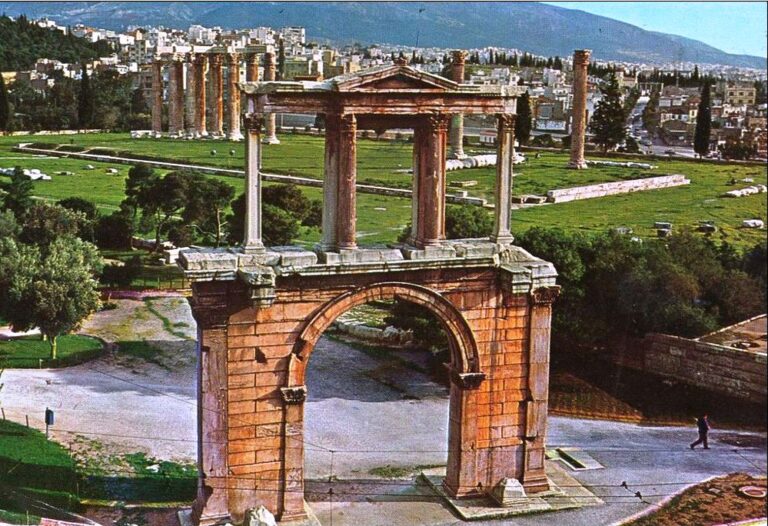 The Arch of Hadrian is a triumphal arch located within walking distance from Syntagma Square, right between the rock of the Acropolis and the Temple of Olympian Zeus. To the northwest, this monument faces the monument of Lycicrates in Plaka. Construction of this temple began in 131 BC to celebrate the arrival of the Roman Emperor Hadrian and to thank him for his benefactions to the city. It is not known exactly who built this arch, whether it was the Athenians or citizens from another city. Symbolically, the position of the arch was to mark the line between the ancient part of Athens and Hadrian’s new city.

Made of fine Pendelian marble, this arch is 18 m high, 12.5 m wide and 2.3 m deep. Its architecture is very similar to similar Roman arches and is crowned by Corinthian-style pilasters. The design is completely symmetrical. The monument has two layers, in the centre of the lower layer there is an arched gate through which people could pass. There were also two columns, which no longer exist and were connected by architraves between the two layers.

On the architrave are carved two inscriptions, one on each side: the first on the side facing the Acropolis reads ‘This is Athens, the ancient city of Theseus’; the second on the other side, facing the new city, reads ‘This is the city of Hadrian and not of Theseus’. It is obvious that the ancient city formed new districts because of the expansion made by the emperor.

In the 18th century, Hadrian’s Arch served as one of the seven gates of the defensive wall built by the Turks around the city against the attack of the Albanian invaders. Since the monument was never fully protected, it has survived through time in excellent condition. Unfortunately, in recent decades, pollution has caused extensive discoloration of the original material and degradation of the inscriptions.