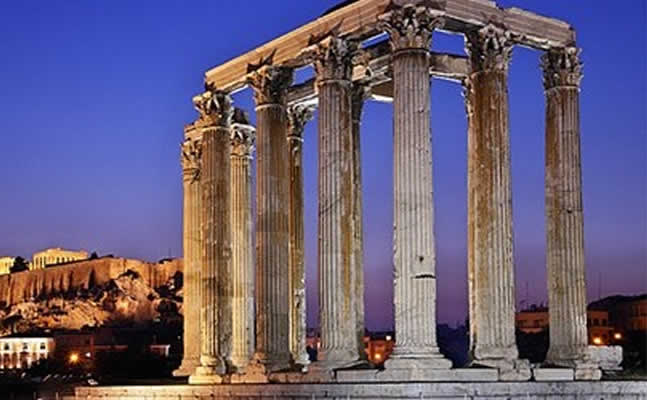 This half-ruined temple is dedicated to Zeus, the leader of the gods of Olympus, and that is how it got its name, the temple of Olympian Zeus. It is located within walking distance from the centre of Athens, just 500 metres southeast of the Acropolis and 700 metres south of Syntagma Square. This temple is very close to other monuments of Athens, such as the Kallimarmaro Stadium, Hadrian’s Arch and the Zappeion Palace.

The construction of this temple began in the 6th century BC and its plans were commissioned to the architects Antistatis, Kalleschros, Antimachidis and Porinius. Originally, it was intended to be built of limestone in strict Doric style and its size was to be the largest of all the temples. However, work was halted in 510 BC due to political unrest when the tyrant Hippias was exiled from Athens.

The temple remained unfinished for the next 336 years. In 174 BC, King Antiochus IV Epiphanes began rebuilding the temple, replacing the building material from limestone with high quality Pendelian marble and the architectural style from Doric to Corinthian. In fact, it was the first time that the Corinthian order was used for the exterior decoration of a temple. However, when Antiochus died, the work again remained unfinished.

In 125 BC, the Roman Emperor Hadrian included this temple in his building program for Athens. Many statues of gods and Roman emperors adorned the temple, including a huge gold and ivory statue of Zeus. In its final form, the temple had 104 columns, each 17 metres high and 2 metres in diameter.

Unfortunately, this temple was only to stand majestically for a few centuries. In 267 AD, during a sack of Athens, the temple and much of the city were damaged. In 425 AD, after the prevalence of Christianity, the Byzantine emperor Theodosius II banned the worship of the ancient Greek and Roman gods in the temple. In fact, he allowed people to use his fine marble to build churches, shelters and other buildings in the city. By the end of the Byzantine period, in the mid-15th century, only 21 of the 104 columns had survived.

The church suffered more damage during the Turkish occupation and the first decades of the Greek state. In 1852, a violent storm completely destroyed the cellar and the large statue of Zeus. By then, only 15 columns had survived and a sixteenth column was on the ground. Work to excavate and restore the temple finally began in the late 19th and early 20th centuries by Greek and German archaeologists and by the British School in Athens. Today, the Temple of Olympian Zeus is considered one of the most beautiful ancient monuments in the city.