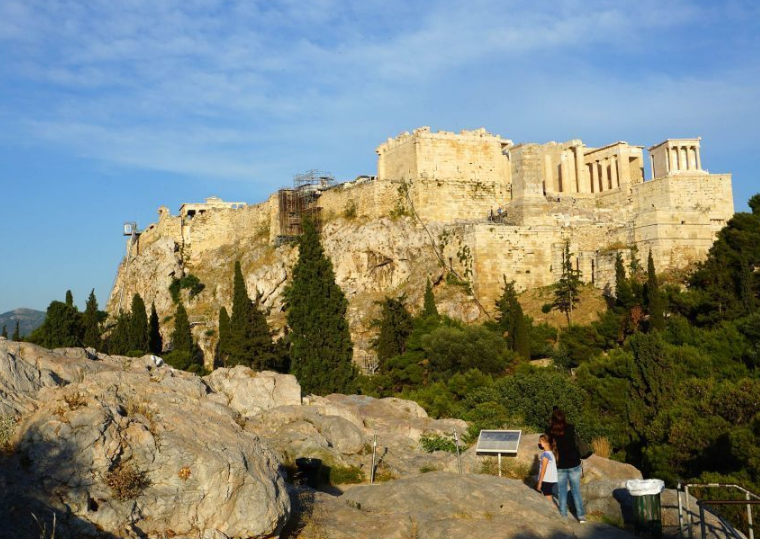 The rocky hill of Arios Pagos is located on the northwest side of the Acropolis The top of a steep cliff is one of the most popular places where locals gather in groups to watch the sunset and the spectacular view of the Athens cityscape.

The hill of Arios Pagos has great historical, cultural and religious significance, as it has been used as a multi-purpose site since ancient times. It is said that the hill was probably named after the ancient god of war, Ares (Ares). The ancient Greeks believed that the site was associated with many important mythological events, such as the first murder trial conducted by the gods. As a result, the hill was the site of the oldest supreme court, Aryos Pagos, in Ancient Athens. At the same time, it was a religious centre and place of worship for the ancient inhabitants of the city; the ruins of altars dedicated to the goddess Athena and the Eumenides, the deities of vengeance, have been discovered. Archaeological finds in the area, including the remains of a settlement, suggest that it was the site of one of the oldest cemeteries in Athens, with tombs dating from the Mycenaean and Geometric periods. Around 50 AD, the first Christian preaching by the Apostle Paul to the Areopagites, members of the court, took place on the hill. Some of the members converted to Christianity, including Dionysius, after whom Dionysius Areopagitou Street is named.

Stairs carved into the rock will allow you to reach the top of the hill and enjoy the magnificent view of Athens.