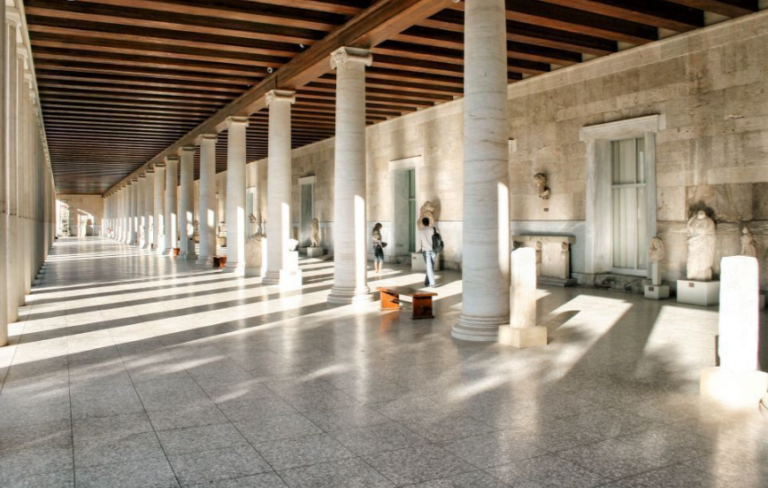 The Stoa of Attalos is an impressive building in the archaeological site of the Ancient Agora in Athens. Originally constructed from 159 BC to 138 BC, this building was donated to the Athenians by Attalus II, King of Pergamos, and his wife, as stated on a plaque outside the Stoa. The building had two floors and two rows of marble columns on the ground floor.

The Stoa of Attalus functioned as a modern shopping centre, with 21 shops along the two floors. In fact, it was the first and largest shopping centre of antiquity and became the main meeting point for Athenians of that period. It was destroyed during a siege in 267 AD and was restored in 1953-1956 by the American School of Classical Studies to house an archaeological museum.

The Archaeological Museum of the Stoa of Attalus houses artifacts excavated at the archaeological site of the Ancient Agora. These finds include marble statues, parts of columns, coins, ceramic vessels, everyday objects, reliefs, weapons and other pieces dating from the Neolithic period to the 6th century AD.

It is worth noting a giant statue of the god Apollo, the large statue of a female figure (goddess or queen), the hydraulic clock (hourglass) used to measure time in the courts, the tomb of a little girl dating back to Geometric times and a bronze Spartan shield taken by the Athenians as a war prize at the battle of Sfactoria (425 BC). Χ.). Recently (May 2012) the restoration work on the second floor was completed and the museum was extended to both floors.