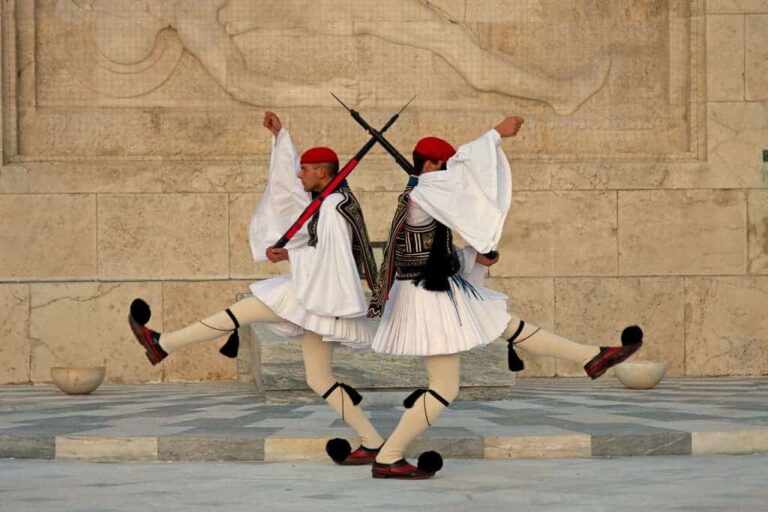 Every Sunday morning at 11 am, people gather in Syntagma Square to watch the official changing of the guard, the military unit whose members stand proudly in absolute stillness in front of the Greek Parliament. There is a change of guard at any hour of the day, of course, but on Sundays it is the official ceremony with official customs.

The Euzones are a special unit of the Greek Army, also known as Tsoliades, who guard the Monument of the Unknown Soldier in front of the Greek Parliament and the Presidential Palace. Through Greece’s historic movement, the Euzonians have become symbols of bravery and courage for the Greek people. The Presidential Guard, as the unit is called today, was formed in 1868 and has been given many names over the centuries (Flag Guard, Royal Guard, etc.).

The duties of the soldiers are partly ceremonial in nature. Each soldier guards for about an hour, three times in total every 48 hours. Throughout these 60 minutes, they must stand perfectly still until it is time to change to another guard. During the changeover, they work in pairs so that they can coordinate their movements perfectly. The steps required by the official ceremony at the time of the change are performed in really slow motion to protect their blood circulation after 60 minutes of immobility.

The soldiers of the Presidential Guard are selected based on their height, excellent physical and psychological condition, as well as their character and morals, as they follow rigorous training before becoming members of this honorable unit. The training lasts for a month and includes exercises to keep the body and mind still. In addition to remaining motionless, soldiers must also make no facial or eye movements and must show no facial expressions.

Their Presidential Guard uniform has historical significance. It refers to the uniform of the Thieves and the Armadillos, two groups of Greek warriors during the War of Independence in (1821) against the Ottomans. In fact, the white skirt of the uniform has 400 folds to represent 400 years of Ottoman occupation over the Greeks.

The uniform consists of:
– the fareon, which is the cap of the Evzones, made of red baize with black hazel
– the white shirt with wide leaves
– the fermel, which is the waistcoat and is the most difficult part to make, handmade with many shapes forged on it
– the Greek kilt (or fustanella), its construction requires 30 metres of white fabric
– tsarouchia, the traditional shoes of the Evzones, which are red, made of leather, with a small tassel on the front. Each shoe weighs three kilograms.
– the fringes, blue and white, symbolizing the Greek flag.
– the silk garters
– the leather belt
– the inner garnet
-and the weapon, which is the most difficult piece to carry, not only because of its weight but also because of the physical pressure it exerts on the soldier’s body.

This is the official version of the uniform worn by the Eyzonians only on Sundays and national holidays. On other days, the white shirt, the fermel and the fustian are replaced by the doulama, a special uniform worn by the soldiers of the Macedonian Struggle (1904-1908). This uniform is blue in winter and brown in summer. In official ceremonies, the Euzonians also wear the traditional uniforms of Crete and Pontus in recognition of the contribution of these regions to the national struggles.