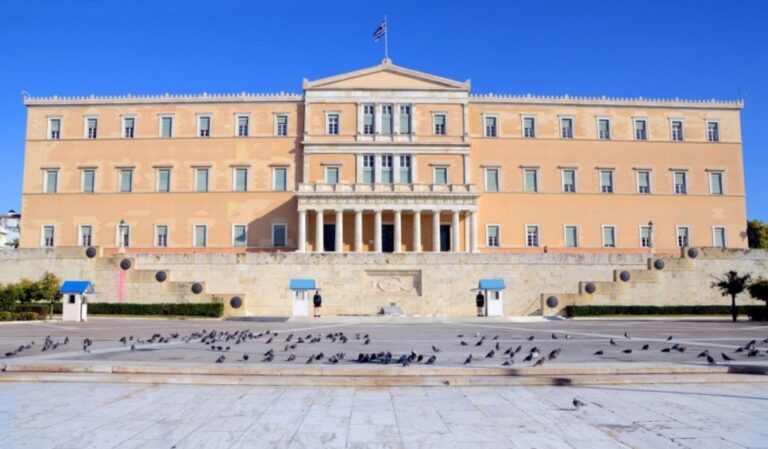 North of Syntagma Square, in the centre of Athens, there is an austere neoclassical building that today houses the Greek Parliament. This three-storey building has two entrances, one on the west side used for the entrance of the deputies to the building, and another on the front side, opposite the Tomb of the Unknown Soldier. Right next to the Parliament, there are the National Garden and the Zappeion Hall.

The construction of the building lasted from 1836 to 1842 and was designed by the German architect Friedrich von Gartner. Originally, it served as a royal palace for the Greek kings. It was inhabited by King Otto and his Queen Amalia and later by King George I and his family. However, in 1909, a fire caused extensive damage to the building and restoration work began. When the monarchy was abolished by Greece in 1924 after a referendum, the building was used as a museum and hospital.

In November 1929, the government decided to move the Parliament to this building. Until then, the Parliament was housed in what is now the Old Parliament on Stadiou Street, where the Historical Museum is now located. Although in the same year, the monarchy was restored in Greece, the Parliament has been housed there ever since and the royal family moved to the current Presidential Palace.

The main chamber of the Parliament is housed on the ground floor, in the former ballroom. It has an amphitheatrical layout and a stained glass room provides natural light during the day. The seats of the Members of Parliament are arranged in five circular sections. A balcony above the hall is used as a guest room. An almost identical, smaller room was constructed on the second floor for the use of the Senate, but since the Senate was abolished, this room is now used for party meetings.

In front of the Parliament is a monument guarded by a Greek army infantry unit, the Euzones. This is the Tomb of the Unknown Soldier, which commemorates all unknown soldiers who lost their lives or bled for their country. The monument was inaugurated on 25 March 1932, the National Anniversary on which the Greeks celebrate the declaration of their War of Independence against the Turks. The Euzonians wear traditional Greek uniforms and their most distinctive part is the fustanella.
The changing of the guard takes place every hour. During their service, the Euzones are not allowed to speak or move.