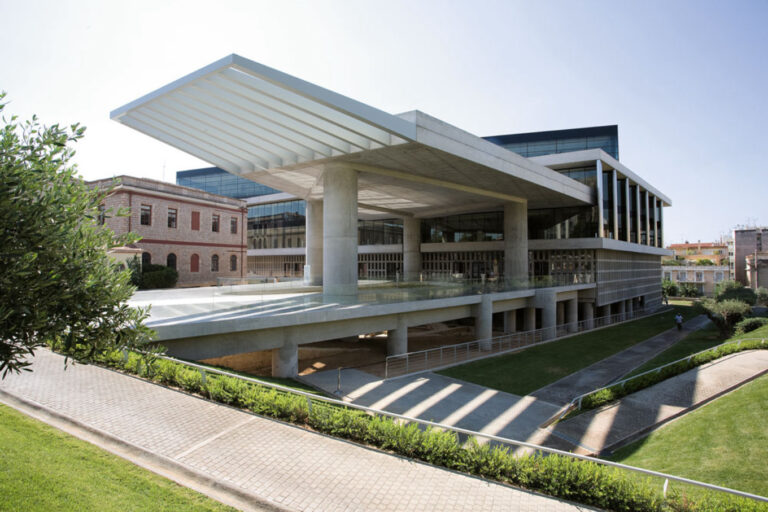 It is located at the southeast corner of the Acropolis rock. It was built to house the huge exhibits found during the excavations at the Acropolis, which were too many to fit in the former small Acropolis Museum.

This new Acropolis Museum basically houses excavated material from the Acropolis of Athens and from some other excavations in areas of Attica, such as the Temple of Artemis at Vravrona, southeast of Athens. The museum was designed by the New York architect Bernard Tschumi, in collaboration with the Greek architect Michalis Fotiadis. The archaeological site over which the museum now stands is the Wilhelm von Weiler building constructed in 1836 by a German architect. The total area of this building is 14,000 square meters and more than 4,000 historical objects are exhibited.

An interesting feature of this museum is the extensive use of glass used in the interior and exterior of the building. All of the objects recovered from the excavation site date back to the Greek Bronze Age, Roman and Byzantine eras. It is a four-storey museum, where three levels have been used to display the historical artefacts and the remaining top floor houses the gift shop, cafeteria, restaurant and offices.

The whole tour of the museum is structured in such a way that visitors go to each of the floors according to the chronological order of the time period. First, visitors encounter the exhibits located on the slopes of the Acropolis. The hall that houses these exhibits is long and rectangular in shape and mimics the uphill path in a rock. Here there are various artefacts and remains of buildings from settlements dating back to the Neolithic period, from 3000 BC to the 6th century AD, as well as ancient shrines dedicated to the gods Dionysus and Asclepius.

The next stage of the tour includes finds from the Archaic period, marble statues used as decorative objects and various gifts dedicated to the goddess Athena, the patroness of ancient Athens. The room in which these objects are kept is a large trapezoidal room. In the third phase of the tour, visitors will see the Parthenon Gallery, where parts of marble structures from the Parthenon temple have been kept for display. This gallery is made entirely of glass that allows natural light to fall on the exhibits on display.

There are also sculptures from the Propylaea, the Temple of Athena Nike and the Erechtheion. There are also some interesting exhibits, such as the colossal head of the goddess Artemis Brauronia, sculptures from the classical period and various types of gifts that contributed to the Acropolis during the Roman period. These gifts even included portraits of emperors, philosophers, gods, warriors and athletes.

In fact, this is one of the main reasons why this museum was created: to put pressure on the British Museum to give the Elgin Marbles back to Greece, to be given a proper home in their homeland. The entire cost of the construction of the Acropolis Museum was covered by the Greek Ministry of Culture and the European Union (European Regional Development Fund). Although it took many years to complete this project (discussions about it started in 1975), the museum was finally opened in June 2009.

The Acropolis Museum is open daily from 8 am to 8 pm, except Mondays and Greek holidays. It is located near the Acropolis metro station and is easily accessible to people with disabilities. Photography is not allowed and measures have been taken to protect the museum’s exhibits. The cafeteria overlooks the sacred rock of the Acropolis.