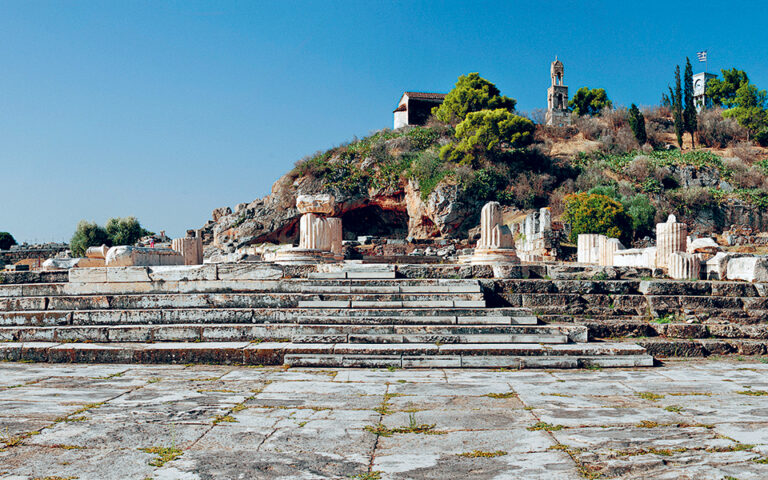 The sanctuary of Eleusis was one of the most important cult centres of the ancient world, where from the Mycenaean Age until the end of the 4th century AD the goddess Demeter, goddess of the renewal of nature and the growth of grain, was constantly worshipped.She taught the Eleusinians the cultivation of the land and the sacred rituals, the all-pure mysteries, for which she claimed absolute secrecy.
Elefsina was founded around 2000 BC on the slopes of the eastern hill of a low hill range in the southwest corner of the Thriasian plain, near the Eleusinian Gulf and developed during the Mycenaean period into a strongly fortified city. During this period the Mycenaean mansion was built, which was identified with the first temple of Demeter, N.E. of the Telestrios of the Classical period.
In the Geometric Period, the private houses were replaced by the sanctuary. At the same time, in the middle of the 8th century BC, the cult of the goddess from a local, rural festival acquired a panhellenic character.
In the time of Solon (early 6th century BC), Eleusis was definitively annexed to Athens and the Eleusinian Mysteries were established as an Athenian festival. In the time of Pisistratus (550-510 BC) the sanctuary and the city, west of the hill, were surrounded by a strong wall with towers.
After its destruction by the Persians (480 BC), the sanctuary was renovated with the construction of new buildings, such as the new Great Telestrion and the Stoa of Philo, built on the east side of the Telestrion a century later.
The last period of the sanctuary’s prosperity is placed in the Roman period, when Roman emperors adorned the sanctuary with new splendid buildings such as the Great Propylaea, the Triumphal Arches, the Fountain, temples and altars.
At the end of the 4th century AD the Mysteries declined, and with the invasion of the Visigoths of Alaric the sanctuary was reduced to ruins and the cult was abandoned.
The continuity of the use of the site in Christian times is attested by the post-Byzantine church of the Presentation of the Virgin Mary, which dominates the hill above the ancient Telemastery, and is built on the ruins of an earlier Christian church.