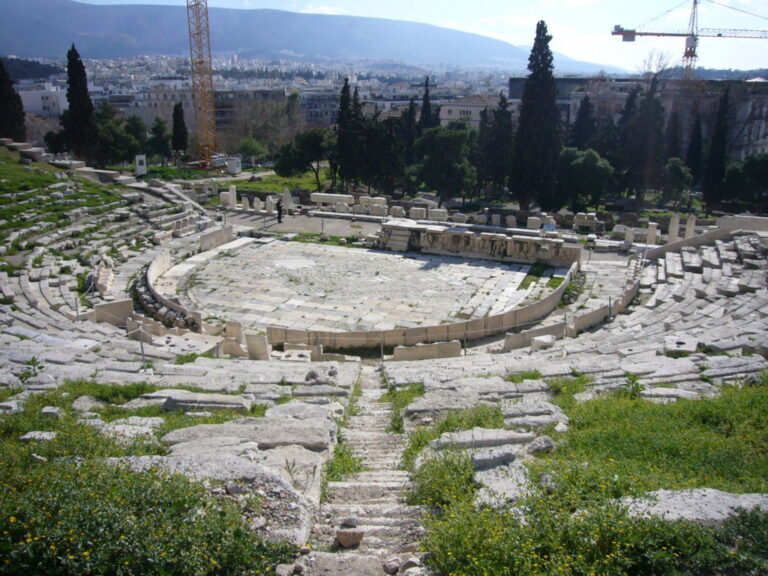 The ancient theatre of Dionysus in Athens, Attica: The Theatre of Dionysus is considered the first example of Greek theatres and the birthplace of Greek drama. It was built in a natural hall on the southern slopes of the Acropolis and is the first theatre in the world. This ancient theatre was dedicated to Dionysus, the god of wine and ecstasy, whose festivals were the driving force behind the development of Greek theatre. Probably founded at the end of the 6th century, the theatre has been rebuilt many times since then.

During the 5th century, the theatre was first used as a regular venue for theatrical performances of plays written by the great tragic poets, such as Aeschylus, Euripides and Sophocles. The theatre was a venue in honour of the god Dionysus and plays were performed as part of these celebrations. In fact, a large statue of the god was placed in the front row so that the god himself could watch the plays and sacrifices in his name.

Much controversy has arisen over the original structure of the theatre. Apparently most of the theatre was originally constructed of wood, but was later rebuilt of stone. In 330 BC stone seats were added which could accommodate up to 17,000 people. The stage was rebuilt over the centuries and most of the ruins we see today date back to the Roman era. In its final form, the lower part had 13 more sections separated by steps and 32 rows of seats covering the perimeter of the orchestra. The upper section had another 32 rows of seats covering only the centre. Later a third section was added.

Today, only 20 of these sections have been preserved. The inscriptions on some of the thrones reveal that they belonged to elected rulers, while the remaining seats were intended for citizens. However, the most impressive seat bore the inscription Priest of Dionysus Eleftherios carved with bunches of grapes. In recent years, significant efforts have been made to renovate the ancient theatre of Dionysus and once again host theatrical performances.