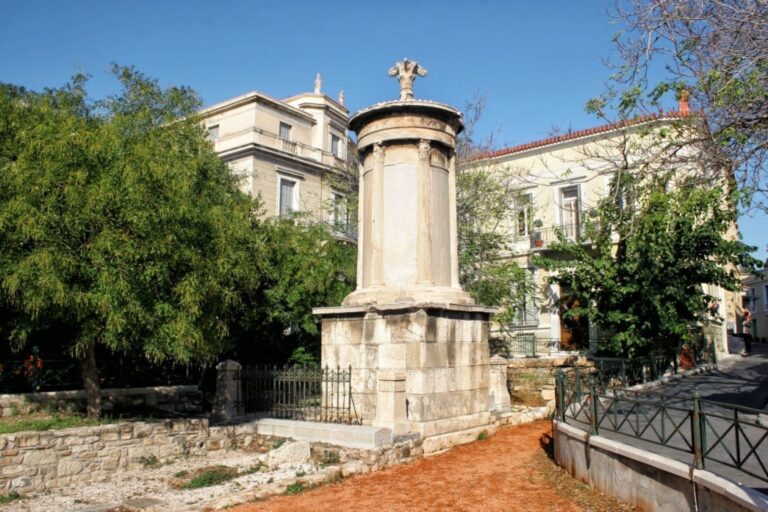 In the area of Plaka, a few steps from the Acropolis Museum, is the Sponsoring Monument of Lysicrates. This monument was erected by the sponsor Lysicrates to commemorate the awarding of the first prize in 335/334 BC to one of the performances he had sponsored.

Sponsors were a very important and honorary title for the ancient Athenians. In fact they sponsored the expenses and preparations for dramatic and musical performances during the festivals of Athens. When the expenses were not covered by the state, dancers were appointed to pay for the costumes, masks, rehearsal expenses, painting of the scenes, sound effects and generally all the expenses associated with a performance.

The sponsors were wealthy Athenians and were considered an honor to take on this task. In fact, the prizes for drama at the Athens festival competitions were awarded jointly to the playwright and the sponsor. To celebrate their victory, the dancers used to build monuments along the path leading to the Ancient Theatre of Dionysus, located at the foot of the Acropolis, where the dramatic festivals were held.

This is why the monument to Lysicrates was built. This monument consists of a circular statue, raised on a high square pedestal. It is the first ancient monument of Corinthian style abroad. It was originally crowded with supports for the bronze tripod where the prize of Lysicrates was placed. Now it is surrounded by a garden in the centre of a small square.

Some versions of this sponsorship monument include the Dugald Stewart Memorial on Calton Hill above Edinburgh, UK and another structure in the Botanic Gardens in Sydney, Australia.