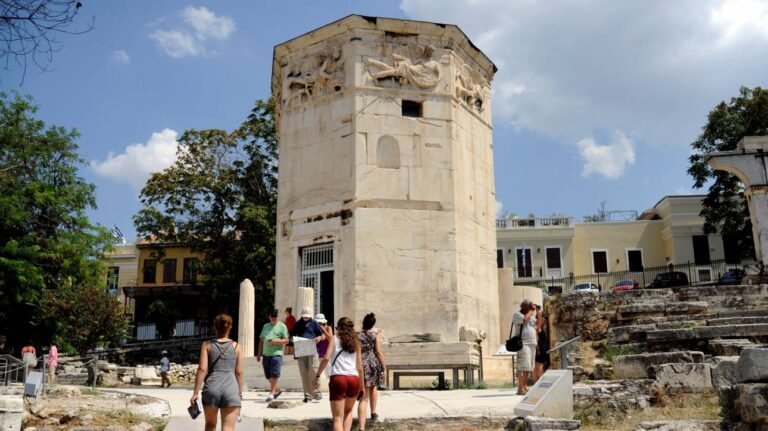 The Tower of the Winds (Aeres) is located in the Roman Agora of Athens, between the districts of Plaka and Monastiraki. It is one of the most famous sights of Athens. It is a 12 meters high structure with a diameter of 8 meters, this tower has an octagonal shape. It was constructed of fine Pendellean marble probably around 50 BC by the Greek astronomer Andronikos of Cyrrus.

This tower has many uses in antiquity. It was originally constructed as a clock, that is, to estimate the time based on the position of the sun. It was also used to indicate and forecast the weather. The tower has a combination of sundials, a water clock and a wind indicator. In fact, its frieze depicts the eight wind deities according to their direction: Boreas (B), Caiaphas (NE), Eyre (E), Apeliotis (SE), South (S), Libas (SW), Zephyr (W) and Scyron (NW).

Inside there was a water clock, like an hourglass, which operated with water coming down from the rock of the Acropolis. During the early Christian times, this structure was used as a bell tower of a church. During the Ottoman occupation, it was used as a tepee, a place of spiritual retreat and character formation.

The architectural design of the Tower of Winds has inspired many other structures in the world. In fact, it has influenced the design of the 18th century Radcliffe Observatory in Oxford, UK, the 15th century Torre del Marzocco in Livorno, Italy, the Temple of the Winds in Mount Stewart, Northern Ireland and also a similar tower in Sevastopol, Ukraine built in 1849.