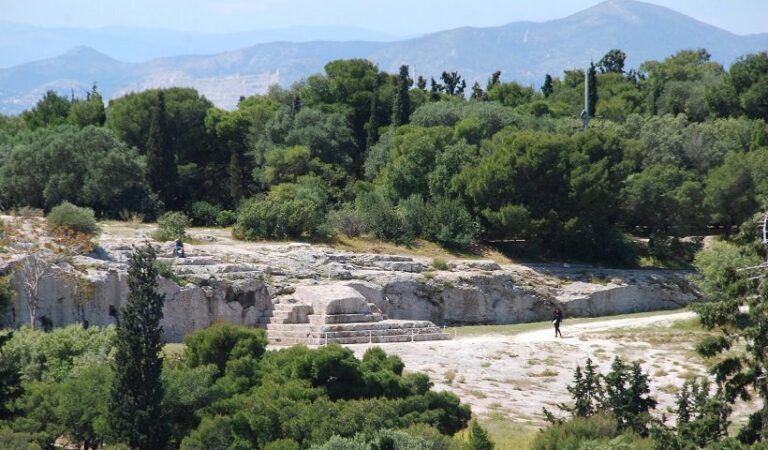 The Pnyx is located about 500 metres west of the Acropolis and is a rocky hill surrounded by parks. It has a special place in world history as one of the most important historical sites. Artificially carved into the hillside is a stone platform or Vima (literally meaning step in Greek), with stone steps leading up to it.

The Pnyx is where the Athenians used to gather to discuss political issues and make decisions about the future of their city. This was the first form of democracy in the world. It was the first time that all citizens of a city, male citizens to be precise, were declared equal and had the right to vote and participate in decision making. The Athenians believed that this task was too important to leave it to one person, the king or a governor, as was usually the case. This process has evolved over the centuries and has led to the democratic forms we have today.

It is believed that the Pnyx was founded in the 5th century BC. It went through three periods of construction. At first, the Pnyx was a simple, natural space with a retaining wall to the north. Then, a semi-circular retaining wall was built and two staircases led to the bema, where orators could speak. The space also had 500 wooden seats for the councillors elected by the assembly. The third rebuilding of the Pnyx was based on the same design, but was on a larger scale. In the first century BC, the Pnyx began to decline because Athens was growing and it was difficult for many citizens to come to the Pnyx. The new assembly of Athenians gathered in the theatre of Dionysus.

It is said that the Pnyx could accommodate 20,000 citizens, although at least 6,000 Athenians were needed to start a debate. The assembly usually convened once every nine days to discuss political, social and military issues.

Excavations at the Pnyx began around 1910 by the Hellenic Archaeological Society. Other excavations were carried out in the 1930s by H.A. Thompson. In addition to the platform of the Pnyx, other ancient remains were found, such as two large galleries built to protect people in case of bad weather, the altar of Agoraios Zeus and the sanctuary of the Most High Zeus.